Symphonic Skin magazine has always had a vision of spotlighting the brightest, most talented people in Central Texas and Christopher Winbush epitomizes that vision in living color!

Catching up with Mr. Christopher Winbush! It was quite the undertaking in stealing a few moments of time from his busy schedule. I decided to dive right in and ask the burning question from the gate…what is the spark? “The spark that led me to acting? You know, honestly man, I just kind of fell upon it. I had a friend of mine that was shooting a movie called ‘Willows’ back in 2014 and she’s like ‘you ought to come try for it’ and I’m like ‘I ain’t never had any acting classes’. The typical thing that most people who are not in the industry would say. I ain’t never did any theater classes, I’ve never done this, I’ve never done that, and I said ‘what makes you think I can be an actor like that?’ and she’s like ‘yes, just come and do open casting call.’ It was right here downtown at the recreation center on Veterans Memorial (in Killeen, Texas) and I went in there and read for one or two roles and the people ended up liking what I was doing and trying to find a place for me in that movie. And eventually ended up playing the main character’s best friend.”

Asked about the lessons he’s learned since becoming an actor, “I did from there, being on set, for the first time being a green horn or a green pea or whatever and funny enough that I’m watching Oscars right now [even though they’re kind of watching me but getting still they’re on right now] and everything but ended up getting on the set and to people say ‘you catch the bug’ and the next thing you know I started, kind of, forwardly looking out for things in Austin. Austin was the next nearest place that actually had independent productions at the time. They had The Leftovers was there, let me see, American Crime was there and they were constantly shooting commercials and stuff. So, a lot of people like ‘you got to go try it there’, so I end up going there and the rest is kind of history. What has been my most valuable lesson is to not compare yourself to anybody else. Don’t be in competition or compete with anybody else. I mean, if it’s for a role then that’s one thing but your audition and stuff like that, that’s really you against yourself trying to make sure that you put your best foot forward in what it is that you’re dealing with. Don’t get mad when somebody else does something that you either went for either. Be happy for them because I still have opportunity and I am of a believer of there is enough in the universe for all of us to get what we want and everything of that nature. So I think that’s the most valuable lesson that I constantly kind of teach myself every time I go for an audition of something or what have you. Or if I’m on set with somebody else who is an actor in the same age bracket or what have you. But I would always tell people, I’m like if you’re on set for commercial or you are set for a movie or you’re on set for an indie movie or what have you, I said there is probably anywhere from 5 to 100 people that probably wish they were here right now. Especially when you’re selected for commercials whether you’re a background actor and a lot of people don’t realize when they look at commercials and things of the nature that does a lot of background actors that never get noticed and never get quote-unquote famous or never get notarized and things like that. In California and New York or Atlanta whatever they make a pretty God damn good living at that sometimes a year but it just depends on what it is that you want to do. So I think that’s been my most valuable lesson as an actor so far to that point.”

Christopher offers some insight on staying active and relevant in the entertainment industry, “The entertainment industry does evolve quickly. How am I able to continue to stay working? First of all, I have a pretty good agent. I just got my agent probably about a year ago. (This interview was conducted in March due to Christopher’s busy schedule) I think I met my agent; I believe let me see…yeah it was in February or January. So my agent, Lily Banks out of San Antonio, Texas ended up signing me up as a client to represent. But honestly, this is going on my sixth year right now in 2020, in acting. I went five years without having an agent. Pretty much four and a half years and it was me doing stuff on my own. Submitting myself to commercials, submitting head-shots…everything is cyber these days so it’s a lot easier to do it, as opposed like in olden days where you have to send stuff off in the mail, or you had to make long distance phone calls. Everything is really a lot more convenient these days with email, and you got cell phones with free long distance and internet capabilities. So things are a little bit easier, but that is how I stay busy working man. I thank God and the universe first and foremost. Of course acting is not the only thing that I do. During football season I work with kids in the Killeen Independent School District’s Career Center as part of the TV and radio department. I’ve been doing that for going on 17 years, and I have other jobs one being a personal trainer.  But acting is my love, acting is my passion. Whenever I’m on set, a movie, a photo shoot, backdrop or something like that; it’s not like I’m working. It’s like they always say; ‘If you do what you love you never work a day in your life.’ If you love doing what it is you love doing then you honestly don’t realize how fortunate you are to be able to do that. I’m glad we live in the world we live in now. We have freedom to act no matter what age you start at, or where you begin as opposed to where you know the journey will end. So yeah, definitely, that is something I’ve been laboring to continue. I have been blessed and grateful to be able to, you know, have a “certain look” which in the industry of acting and television and stuff like that, it is what you bring to the table. I get asked quite a bit about the acting stuff, and I tell people if

you don’t like rejection don’t get into it because you’re going to get more noes than yeses. A lot of people get into the industry looking at the Oscars. They automatically think it’s really easy to get to where those people have gotten to, and a lot of people have made sacrifices and done things we have no clue about. When I got my agent she asked if I wanted her to continue submitting me to background acting gigs and stuff like that. When somebody gets an agent they get one to get more auditions and to get lead roles. At the same time a lot of actors don’t want to be limited to a pigeonhole. That’s like being type-cast. Many actors become type-cast because they don’t say they are willing to do whatever rolls. When she asked me, I said I’ll do whatever. In return she said I had a good shot of making some advancements in the industry, and this is all about what I expect out of myself.”

Various life experiences bring Christopher to his current state of balance,” I started this journey six years ago and acting is always something I wanted to do. I worked on base at the Ammo Supply Point (ASP) for almost 10 years. To make a long story short they laid us off because the military was coming back. I understood that, but after almost 10 years I was like what do I do now?  I took a lot of time off trying to figure out what it was I wanted to do. The first thing I thought was, I got to continue to keep a job. I started the journey of Personal Training first then it went to the acting, and of course the commentating thing was always there. I’ve been doing that since 1998. I forgot to put that first. Just trying to better myself every day, just trying to stay humble you know. Hustle hard and achieve the dreams. I’m still single. I’m dating someone, but I’m single and never been married. Don’t have any kids. I don’t really have issues that some of my actor friends have with balancing marriage, family, and relationships”.

Christopher tells about what’s coming next, “I’m just going to continue to keep working on getting on these commercials. It seems like the commercial niche right now is where the universe has me. Of course I like movies and stuff like that, but they don’t shoot enough movies and stuff in Austin. Man, I just continue to stay working. Hopefully stay consistent with booking these commercial gigs, but like I said you know that’s just where I believe my niche is right now. Hopefully sooner than later and everything down the line, God grants me my request and I’ll be able to be in things that are bigger than what I’m doing now. That’s the only thing I’m worried about. I just need to keep progressing and stay busy working. See how far this thing goes but right now man, I’m just enjoying the ride. Like I said before, I celebrate my big victories and small victories. I appreciate you man. Like I said, I didn’t know you had a magazine much less two magazines. Much success with you and your personal training and stuff like that. I already know you got the hype to do that. You know of course you might end up seeing me in the morning, or whatever one of these days in the gym. Hopefully this does it for you man. I want to thank you for putting me in your magazine. I’m grateful brother, and that’s the way I’m trying to stay and remain. That’s the attitude I want to keep especially with the acting thing man, because I do know there are people who look at me and think I’m killing it. Some tell me how they wish they were doing what I’m doing. I have to catch myself and keep myself grounded. I keep myself humble. Regardless of what I have or what I don’t have, or where I’m at and where I want to be, I just stay grateful and stay humble. I hustle hard because it’s always somebody wishing they were where you are. Just run your journey and improve on yourself. Compete with yourself and nobody else, and the rest will take care of itself. Thanks to you brother I appreciate you man.” 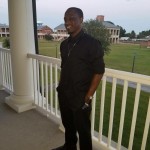